Glad to be back showing folk some of our spectacular wildlife. Typically, the first trip out since lockdown was wet, but we still managed to find some nice things by sticking to the coast. The black guillemot numbers are at their highest, with all the juveniles now in full plumage. Common Seals have bred successfully, with good numbers on the rocks near Ardgour, accompanied by screaming hordes of Common Terns. The huge flocks of 200 or more Mergansers and Eiders are still in evidence. Further around the coast we managed to spot a Red Throated Diver amongst these. It finally turned into the light so that the red of its throat was visible. We also managed to spot a small female otter, busy fishing off some rocks. Although it was quite far out, an otter is always great to see. Nearby there were plenty of small birds to distract us, which included lots of tricky juveniles. These included a flocks of Twite, Wheatear, Whinchat and Stonechat, Rock Pipit and Meadow Pipit and an intriguing Redwing. This is a probable scarce local breeding bird. The mist was low, which meant that raptors were hard to come by, but we managed to find a few Red Deer stags, low down by the water, and Greenshank at the foot of Loch Sunart, where they have obviously bred well. An unexpected treat was an excellent sighting of a Pygmy Shrew, which hunted in fairly open vegetation, allowing us a good close look before it disappeared.The next day we ventured inland in search of sun and raptors,  both of which we found. Enjoyed watching a pair of White-tailed Eagles interacting with a Golden Eagle, with a further goldie nearby. Angela had a glimpse of a Merlin, but the rest of us could only see a large mixed flock of hirundines and Swifts that were harassing it. Other birds of prey seen during the day included Buzzard, Red Kite, Kestrel and Sparrowhawk. Got amongst a nice mixed flock of small passerines, including Spotted flycatcher, Treecreeper, Redpoll, Willow Warbler and Goldcrest. We searched for and found a pair of Black-throated Diver, which appeared to have a well-grown youngster with them – always good to see. Also fought through the non-socially distanced throng of folk at Loch Ruthven to spot Slavonian grebe, but did not linger any longer than we had to there, even though we were all out on the beach (the hide is rightly closed at present). Mammals included lots of Sika deer, also Red Deer and Roe Deer, plus a nice pair of Brown Hare and a few Rabbits.

Finally managed to get a butterfly transect done, and were shocked to find that this was the first of July – a consequence of the weather. The Scotch Argus have emerged and are looking dark and glossy. Speckled Woods have finally appeared in numbers after a poor spring, and we continue to see a few Small Tortoiseshells (along with loads of Peacock caterpillars). 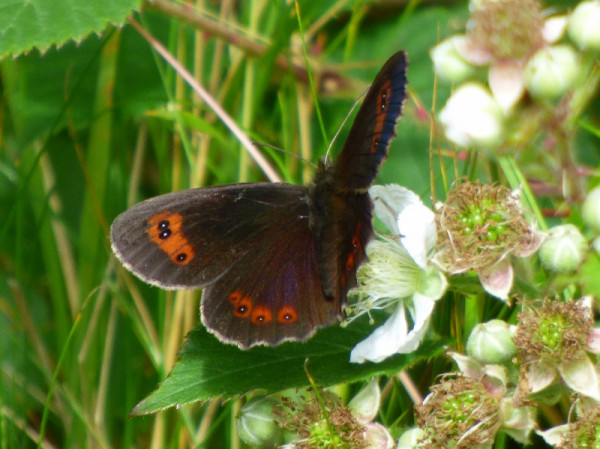