A Wealth of Eagles 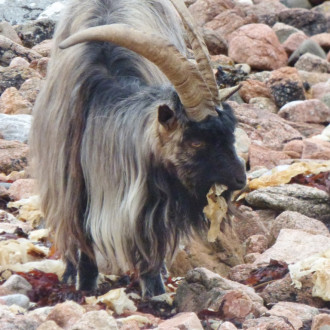 Goat on the beach 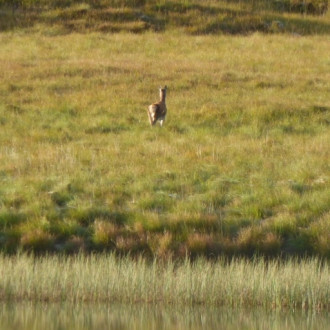 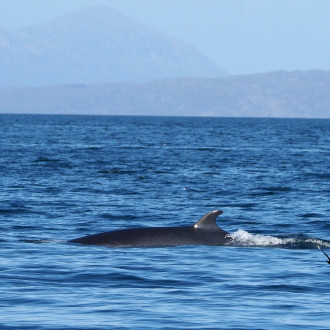 Our programme of Glenloy Wildlife holidays has continued as planned so far throughout September, despite an increase in the volume and complexity of guidelines and rules about coronavirus. Once people arrive and settle down, these do not impose much of an imposition, apart from the inevitable wearing of face masks. Our impression is that guests have been desperate for a break, happy to see wildlife, and grateful for the opportunity to talk to others outside their social bubbles – albeit at a socially responsible distance. A maximum number of four guests no doubt helps this distancing. We have found that this is far more difficult on boat trips, where the wearing of masks, even while outside, has become mandatory.

The Early Autumn Wildlife holiday got off to an inauspicious start with torrential rain overnight and all morning of our first day out. The burn at the bottom of the drive flooded and poured over the gateway – the first time this has happened in 13 years! Needless to say, there was an impressive amount of water about. Despite all this we managed to see some wildlife including a sea eagle, deer, seals and an obliging dipper. We even managed a walk in the afternoon up the side of Inchree Falls, which were truly spectacular- and spotted a treecreeper.

Fortunately, the rest of the week produced some fantastic wildlife. We had some great eagle sightings, including a close flyby of a goldie in Glen Loy. Two sea eagles were terrorising the gulls at Lochy Mouth. Indeed, one of these was feasting on one. Black grouse were seen in the late afternoon in Glen Roy. The circular route to Lochaline produced an otter and the wild goats were back close to the coast. We had a raptor fest in the Monaliadhs, with no less than 3 goldies (one of which perched on the top of a hill), 2 sea eagles, an osprey, a peregrine, many buzzards, kites and kestrel. Slavonian grebes were still present on Loch Ruthven, but have now changed to winter plumage, while more Slavs were spotted around the coast of Loch Linnhe. A further 5 golden eagles and a peregrine were spotted on the Eagle Watch Cruise along Loch Shiel from Acharacle to Glenfinnan, along with an unexpected whooper swan. The last day proved to be one of the most spectacular with bright sunny skies and calm seas. A whale watching trip on the Sheerwater produced multiple sightings of probably 5 different minke whales, along with many porpoises. Large rafts of auks, young shearwaters and gannets indicated the area to hunt for feeding cetaceans.

We are still welcoming people on Pine Marten breaks, and resident guests are able to go out on day trips, coronavirus restrictions permitting. The martens are now coming more reliably in the evening at dusk, sometimes with the two young males hanging about and playing. They have discovered the trick of sliding down the windscreen of the minibus. Wednesday produced a red-letter day trip. We had sightings of 6 sea eagles, including two following a trawler for discards, great views of a family of 3 goldies and watched two young otters feeding. The deer were not doing much, but the stags had now joined the hinds. Other wildlife included several seals, a flock of twite, several porpoises and the wild goats. We thought that the chance of a ‘Big 5’ had gone, but just as we were about to turn up the drive back to the Lodge a red squirrel crossed the road in front of us.

The Deer and Eagles trip also produced a wealth of eagles, this time including a hunting adult goldie at Stronchreggan. Sea eagles were seen on several occasions, including over the ridge at Lochaline. The red deer rut is slow to start in earnest this year, but the signs are encouraging. We had a magical early morning trip to Loch Quoich, with hinds and calves looming out of the mist close to the road. As we reached the dam the fog cleared, just in time to catch the rise of the sun, illuminating the mountains. A break for a snack and drink found us surrounded by roaring stags, although spotting them and their harems at the top of the hills was a little tricky! On the way back a merlin dashed across the road from tree to tree in front of us. Sika were more active, with stags chasing each other in Glen Roy. The goldies there also made an appearance as did the black grouse. We saw our first flock of redwing of the season this week. The beech and birch trees are turning, the bracken and heather having already browned. Devil’s-bit scabious and the last of the grass-of-parnassus soldiered bravely on, but autumn has certainly arrived.