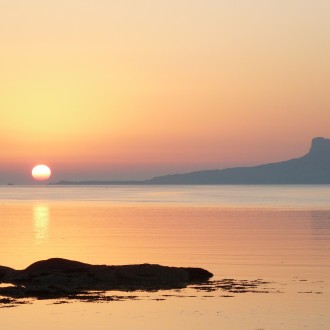 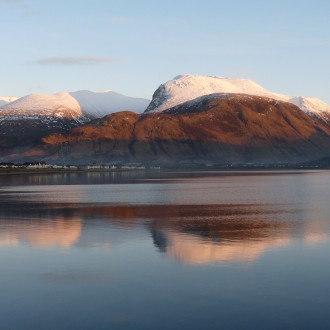 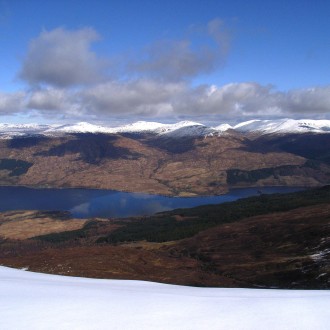 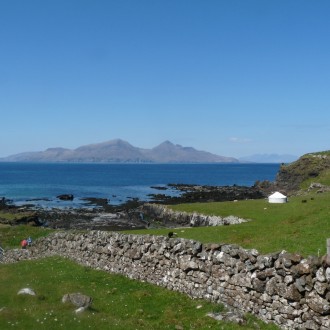 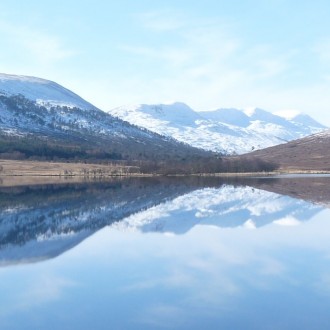 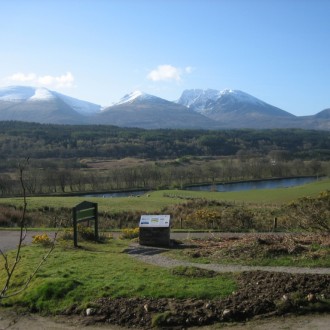 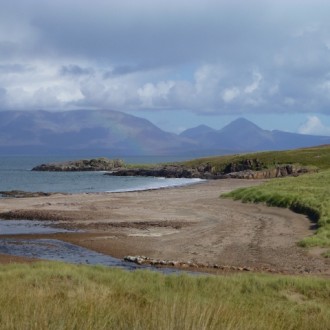 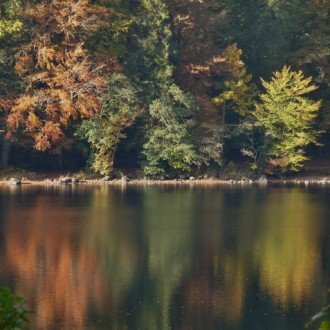 The area around Fort William and the western portion of the Great Glen, including the imposing Nevis Range, with Ben Nevis, Britain’s highest mountain at 1344m, dominating the skyline. The dark and brooding mountains of Glen Coe and Glen Etive in the east of the district are a Special Protection Area for the golden eagle. Other montane habitat can be found around the region, with the hills of Glenfinnan containing the only British colonies of the alpine plant, Diapensia.
Loch Linnhe, Loch Eil and Loch Sunart are major sea lochs with resident populations of Otters, Seals and Porpoise, with several pairs of Sea Eagles to be found throughout the district. Large freshwater lochs, such as Lochs Lochy, Garry, Shiel and Arkaig have remote shores and Knoydart, to the west of Loch Arkaig is indeed known as the “Rough Bounds”, with parts more easily by sea than by road. The Caledonian Canal links Lochs Linnhe, Lochy, Oich and Ness, and offers magnificent floral displays in summer, along with ample habitat for nesting birds in its wooded margins.

To the south lies the peninsula of Ardnamurchan, the most westerly point on the British mainland and a hotspot for whales and dolphins. The wider Ardnamurchan region includes the remote areas of Morvern, Sunart and Moidart; unspoilt regions with a host of wildlife watching opportunities, and one of the last remaining havens for the Scottish wildcat. At least one day will be spent in this area during your holiday.

The ‘Road to the Isles’ passes through spectacular Glenfinnan, noted for its monument to the gathering of the clans in support of the Jacobite cause, and the dramatic railway viaduct, latterly of Harry Potter fame. Arisaig, the gateway to the Small Isles, is famed for its ever-changing light illuminating the vista of sea and sky across to the islands, whilst beautiful white sand beaches backed by dunes and machair stretch away to the north towards Morar. A Grey Seal or two usually grace the busy harbour at Mallaig, along with nesting Tysties. The sea crossing to the Small Isles of Eigg, Muck, Rum and Canna can reward visitors with sightings of Whales, Dolphins and Basking Sharks, as well as a wealth of sea birds.

Other locations of interest within reasonable driving distance of Glen Loy include the spectacular geological feature known as the Parallel Roads of Glen Roy (also good for raptors), Creag Meagaidh NNR, Appin and the north Argyll coastline, Loch Ness and Glen Garry.