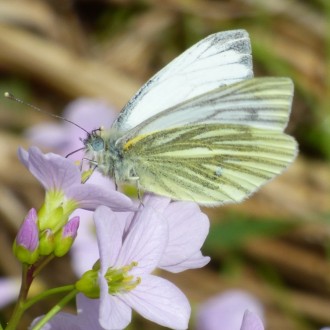 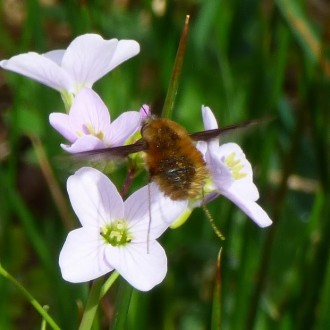 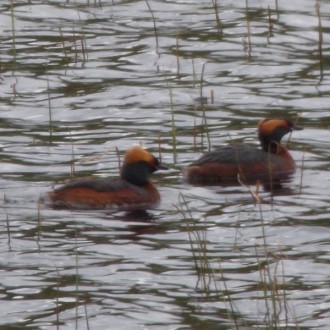 April has been a busy month for us, with the Otters and Eagles trip (see last blog), two 4-night bespoke holidays and our 4-night West Highland Spring holiday, not to mention various Pine Marten breaks and early morning trips to watch the blackcock lekking. It is always great at this time of year to see the leaves unfurling, the first of each of the spring flowers bursting into bloom, and to hear the faintly-remembered songs of newly arrived species of migrant birds. We have been blessed with some great weather this month, albeit the overnight temperatures dropped to freezing for a while before Easter. There has been rather little rainfall, and the rivers and burns are just trickling along, while water levels in the lochs are very low for this time of year. An absence of winter snow means that it will take some considerable downpours to restore these.

As usual, different holidays produced different highlights. The first of our bespoke trips had provided a lovely whinchat in Glen Loy, along with obliging golden eagles. Tree pipits are now calling everywhere in the glen. For old times sake, with returning friends , we took the Loch Shiel cruise and enjoyed no less than five golden eagles and a sea eagle along Loch Shiel. On a lovely sunny morning the banks at the shallower end towards Acharacle were covered in newly arrived greenshank, plus breeding dunlin soon to ascend to the hilltops. We eventually found ring ouzels along Glen Roy. My sighting of the break, however, had to be a stunning female emperor moth caught in the light trap.

During the second of our bespoke holidays we had a fabulous trip to Loch Ness and Loch Ruthven with one guest who had an ambition to see a male hen harrier. Not only did we find a displaying harrier above Loch Ruthven, along with its mate, but also a pair of red kites, a fishing osprey, a peregrine, several buzzards, a kestrel and a sparrowhawk! Not to be forgotten, we saw a fantastic five pairs of Slavonian Grebes, all in superb breeding plumage. We also had red grouse, sika and deer plus a black-throated diver on the same day. This could not have been planned! On the same holiday we had plenty of great northern diver, lovely views of twite, golden eagles and heard our first cuckoos calling.

Our official ‘spring break’ was memorable for the number of golden eagles we saw, no less than ten in three days, with more than one sighting of some of these (assuming they were the same birds). Deer were also much in evidence, with large herds of red stags highly visible in a range of locations. Most have now shed their antlers. Our trip to Loch Ruthven produced a different cast of wildlife, with several brown hare seen, along with black grouse, eagle and peregrine, together with the first cuckoo sighting of the year. Swallows and house martins had arrived by now, along with reeling grasshopper warblers, singing whitethroat, a tentative wood warbler and exultant blackcap. Bluebells were seen flowering in profusion by the coast, even earlier than usual, accompanying the more expected primroses and wood anemones. The early peacocks and green-veined whites of the season were joined by orange-tips, with eggs also found on mayflower. We even saw our first large red damselflies of the year, along with a pair of greater (dark-edged) bee flies.

At home we were welcomed with a serenade of chiffchaff, willow warbler and blackcap as we stepped out of the car following a swift overnight trip to Edinburgh. As soon as the feeders were refilled the red squirrels re-appeared, and right on cue in the early evening the pine martens arrived. Bats flew round the yard as the light started to fade. I even saw a cuckoo fly over the house earlier in the week. Today (May 2nd) we found the first green hairstreak in the glen, along with grasshopper warbler, redpoll, siskin, whinchat, stonechat, cuckoo and eagles. So all is set fair for a good May with plenty of variety.