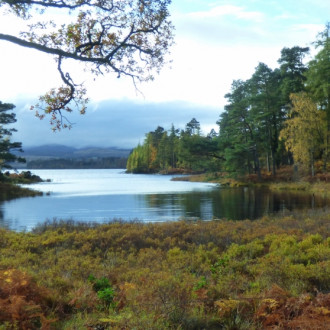 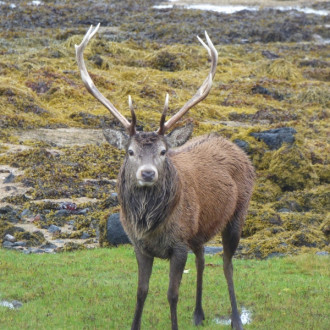 Stag on the beach Loch Sunart 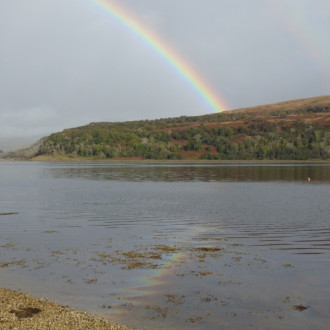 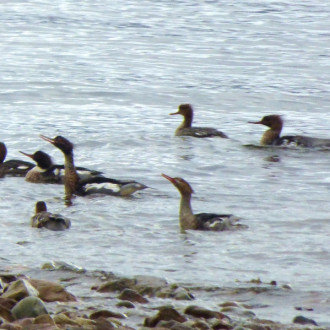 October brought some of the most spectacular autumn colours we have seen in years, from vivid red rowans, through orange birch to fluorescent yellow aspen and golden bracken. We even managed to avoid getting soaked by and large, and although the weather was mixed, there was a fair amount of autumn sun to illuminate the hillsides and woods. The panorama from the viewpoint at Glen Roy was particularly spectacular, even more so as this also produced a pair of golden eagles and several active sika including a pair of stags clashing antlers.

Deer remained active throughout the last three of our scheduled holidays, although stags were looking a bit tired and settled by the end of the third week of October. Nevertheless there was still a fair amount of roaring, chasing and posturing on the rutting grounds. Each holiday we arranged an early morning trip in order to catch the deer at first light. At this hour, the deer are closer to the road and more active. To add to the success with sika, we even managed to see a couple of red deer locking antlers. Notably, there were lots of well-grown calves with hinds almost everywhere we went. The mild winter past must have been good for calf retention. The estates will now have their work cut out to reduce numbers. Hot off the heels of watching red deer one morning we saw a surprise elk (in a private collection we passed) – a much larger and robust beast, and an interesting comparison.

Raptors featured well in all trips. The merlin seen on the Eagles and Deer trip was still actively hunting above Loch Quoich, and we saw another dashing across the road by Loch Sunart later in the month. Peregrines and kestrels both featured well throughout the autumn. We rarely see kestrels in Glen Loy, but even managed some here, while the larger falcons were seen in three different locations. Goldies showed reliably, including a number of youngsters. One pair was seen mobbing a sea eagle. On our last circular trip of the season we had both adult and juvenile white-tailed and golden eagles together (one of each in two locations), allowing differentiation of both species and the adults from the juveniles. Buzzards were everywhere, with red kites and sparrowhawks also showing well.

Migrants were generally slow to arrive, with only one flock of fieldfare seen to date. There were plenty of redwings, however, the paucity of berries locally means that they are not stopping on the way through. Goldeneye were also slow to arrive, with drakes, not yet in full breeding plumage, only seen on the last holiday. We managed to find a group of Greenland white-fronted geese on Kentra Moss; never an easy task. There were skeins of pink-foots passing over all month, and following them east, we caught up with thousands of these compact geese across in fields on the Black Isle. Sea ducks were also in short supply here, but we managed to find a nice pair of long-tailed duck as well as flocks of scaup. More remarkably there was well over a hundred Slavonian grebes in the bay near Udale, which rather puts the small groups we have been seeing in Loch Linnhe into perspective. The great northern divers have started to come back, with guests enjoying sight of some in their full breeding plumage, whilst others were transitioning to their drab winter garb. A couple of family groups of whooper swans, one of which flew low over our heads to land in a loch, was a late added bonus on the last day of our season.

Other highlights of the month included large flocks of passerines, including one of over a hundred tree sparrows on the Black Isle, along with another of linnets. We also managed one of our best displays of harbour porpoise on a boat trip from Mallaig. The day was calm enough to see a school of around twelve individuals surfacing repeatedly around the boat – unusual behaviour for this shy mammal. Later that day we watched an otter fishing for over half an hour, before it finally brought a large catch out onto the skerries to eat. Although distant, we had a good long view through the scope. Red squirrels are also returning to the garden, having been more common amongst the hazel trees by the side of the river earlier in the month. Pine martens have been coming in numbers. Our prodigal female has been feeding regularly, along with her male kit, and the collared male is also visiting nightly, often with a brother. We have still not determined quite what his collar is, apart from consisting of green plastic. Now the clocks have changed we will be feeding the martens even earlier, and they should be enjoying their dinner as we sip our afternoon tea.

<< A Wealth of Eagles