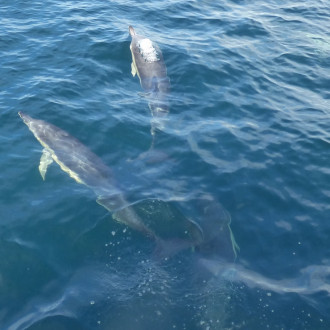 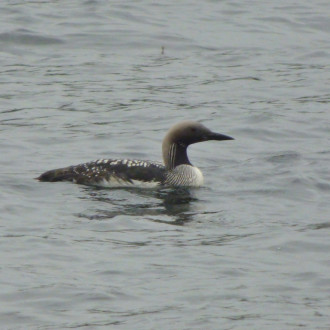 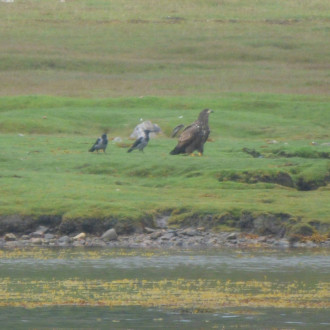 Have just finished back to back holidays, with a bespoke holiday for a family followed by our scheduled ‘Whales and Other Wildlife’ holiday, with deep cleaning of the Lodge in between. Fortunately, we have sufficient rooms to ensure that each can be rested in between guests whilst we are restricted in numbers. The weather has turned autumnal, with increasing winds, turning bracken, falling leaves and cooler evenings. Needless to say, the wildlife was completely different from one week to the next. Pine martens thankfully have been performing nicely. One young male spent some time pratting about on the roof of the minibus the other evening, before falling off, much to the amusement of watching guests. The red squirrels, which were constantly on the feeders at the end of August have become much scarcer (although still around), no doubt taking advantage of natural bounty at this time of year.

We took two boat trips out to Staffa. The sea was flat calm on the first, and full of birds and porpoise. We came upon a pod of over two hundred common dolphins, which leapt and played in every direction. Positioned at the bow of the boat, we had super views of dolphins bow-riding and whizzing about under the water. The second trip was windy and wilder, with no cetaceans showing, although there were still plenty of gannets fishing along with some remaining shearwaters and the odd skua. The fantastic geological splendour of Fingal’s cave and the basalt columns of Staffa always makes the trip worthwhile. Fortunately, we were able to spot porpoise and even a minke whale later the same day in a more sheltered sea loch.

The first week we struggled to find eagles with the merest glimpse of a goldie, and a distant white-tailed eagle. The second week they were everywhere, with sightings of one or both species every day. A distinct highlight was seeing a golden eagle stoop onto a red grouse (two more escaped), which it killed and proceeded to eat. Two further golden eagles flew by as it was doing so, one of which was a youngster, and presumably all from the same family. Our best white-tailed eagle was a juvenile sat on the ground at the head of Loch Eil, shadowed by two hoodies. The latter became increasingly bold, starting to peck at the eagle’s tail. The eagle clearly didn’t want to move far, but we were treated to the sight of it making short flights in order to escape its tormentors. Other birds of prey included peregrines, merlin, hen harriers, osprey, kites, kestrels, sparrowhawks and the ubiquitous buzzards – a good time of year for raptors.

Similarly, the first week we had great views of black-throated divers, particularly on Loch Tarff, whilst the latter was replaced by red-throated diver in the next trip. The black-throats have probably moved out to the coast now. The last of the Slavonian grebes, an adult and a juvenile, were still on the water at Loch Ruthven this week, whereas there had been at least ten the previous week. On the sea the eider drakes are starting to regain their white plumage and even the merganser drakes are beginning to colour up. We saw several flocks of twite, many large groups of meadow pipits and some large flocks of mistle thrush – all a sign of impending autumn. We also came across a huge accumulation of around eighty ravens, dancing and wheeling above the ridges of Glen Roy.

Deer were well to the fore, although hinds were much more evident than stags, with some large herds of up to a hundred beasts. The stalking season is now well underway, so apart from a few that were sticking to lower ground, stags were scarce on the ground. The numbers of sika seem to be growing. We even saw one close to Banavie at the weekend. Other mammals included a pine marten with no tail – seen crossing the road one morning, and a couple of otters. One large dog otter was spotted by the edge of Loch Moidart – the first time in twelve years we have seen one from the road here! It was bringing a particularly large crab to shore. Best of all Angela found a hedgehog on the gravel path at the rear of the Lodge. Insects included the last of the year’s Scotch argus, and a few dragonflies, including common hawker. Wonder what the next week will bring?