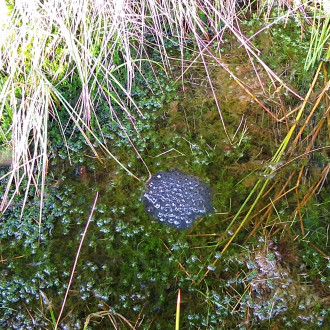 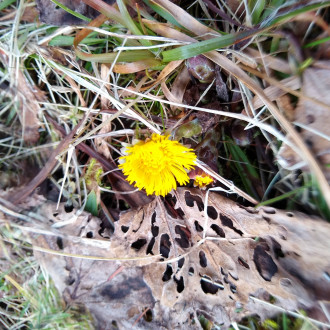 Finally, we have had a dry day (so far) and have managed to go out for a longer walk than usual this afternoon. The birds are making up for lost time with woodpeckers drumming, thrushes singing from the tree-tops and robins busily proclaiming their territories. Along the forest track at Erracht we found our first frogspawn of the year, along with a chorus of croaking frogs, and a lurking newt. The first ‘real’ plant of the season, coltsfoot, was just coming into flower. In the garden the red squirrels are re-appearing, and we watched two individuals squabbling for the right to monopolise the seed tray. Across the Great Glen, Aonach Mhor is covered with snow and finally the skiers are getting a look in. A reminder that winter is still with us, along with the flushing of a woodcock this afternoon and the busy presence of large siskin flocks.

Our scheduled season started well on Tuesday with a visit to the local black grouse lek. Again, it was fine (at least until later in the morning). There were six males on the lek. Although not super-enthusiastic yet, there was enough activity to keep our guests happy, and the blackcock were certainly looking smart enough in the early sunshine. As usual we carried on to Lochy Mouth where there was a huge roost of gulls, together with a few ducks and waders, including goosander and goldeneye. We had a little wait for an otter to arrive, but a large male arrived after half and hour, as usual seemingly out of nowhere. It obligingly brought a large flatfish to the near rocks to feed. These had only recently been vacated by a seal. Later that day our guests found another trio of otters off the coast near Morar.

I took the same couple out for a day trip yesterday and despite mixed weather we had a great day. The ‘Big Five’ were all successfully ticked off, with animals emerging on cue in all the right places for once. Just the two otters today, both in areas we were seeing them at the end of last season, which was great to see. A distant sea eagle was spotted on the monument at the point of Gour, also in its usual position, and a golden eagle soared unflappingly above the hills near Kingairloch. The black guillemots are back on the nest boxes at Ardgour, resplendent in their black and white livery. Around the Ardgour coastline there were several great northern divers in winter plumage, along with even more Slavonian grebes. There must have been around twenty grebes scattered around. Almost all the shags we saw had prominent glossy crests. As an added bonus a small herd of around fifteen whooper swans were swimming in the sea close to Glen Gour. Further round the coast a couple of purple sandpipers were keeping company with a flock of turnstone and a pair of golden plovers. The latter were already in summer plumage, with notable black bellies. In total we spotted some fifty-two species of birds, which is pretty good going for the West Coast in winter.

We found quite a few wild goats along the coast road, mostly in twos and threes over a long stretch. There was also a couple in Glen Tarbert on the return leg, so the population has to be quite sizable. Strangely, we did not notice any kids yet, which are usually produced in February locally. Common seals were also plentiful around the coast, and present on all the usual rocks. The other ‘Big Five’ species could hardly be missed. Everywhere we went we saw herds of red deer. Without trying too hard to count them there must have been several hundred, and these were only the ones easily glimpsed from the minibus. The sheer numbers of visible deer just confirms that there are far too many deer about, the population no doubt exacerbated by the mild winter. SNH have just agreed a relaxation on the culling restrictions for deer in Scotland, and not before time. Almost every conservation project discussed at our last Biodiversity Action Plan meeting this week relies on reducing grazing pressure, which can only come about through greater deer control.