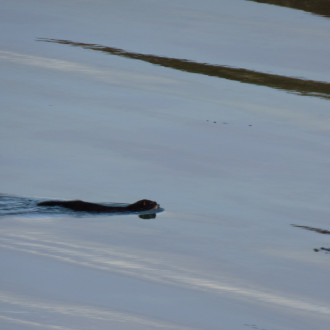 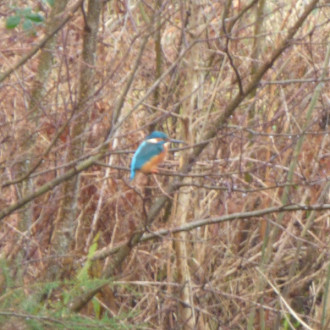 Kingfisher by the Caledonian canal

Happy New Year! As I write, overnight snow is melting, it is pouring with rain and the wind is gusting. To date this decade we have had mild, wet and windy conditions – not ideal for wildlife or naturalists at this time of year. Unfortunately, this has been typical of the last three winters and may well be indicative of things to come as the climate warms. Hogmanay at least was a stunning day with a frosty start, clear blue skies and snow on the mountains. We were driving back from Edinburgh early in the morning and were able to watch the sunrise illuminating the mountain tops as we headed northwards. Glencoe, already littered with photographers, was particularly spectacular. Herds of red deer flocked around the newly rebuilt Kingshouse Hotel, posing for visitors. Sadly, although New Year’s Day was mostly dry it was dull and uninviting. A wildlife trip up Loch Arkaig produced little more than buzzard and deer, although Angela did manage to celebrate with a dip in her new wetsuit!

Since then, the weather has been a challenge, so we have been quick to take advantage of any breaks. So far there has been one nice day, which turned out to be a memorable one as we headed for the coat. The clouds and mist lifted as we reached Glenfinnan, revealing clear blue skies and a sun that even provided a modicum of warmth. Our first stop at Prince’s Cairn, overlooking Loch nan Uamh, produced the expected seals and great northern divers, which can be reliably found here throughout the winter. From Arisaig village we watched flocks of wigeon in the bay, together with greylag geese and waders, mainly oystercatchers and a few curlews. The village itself always has good numbers of starlings and house sparrows, with jackdaws and rooks (unusual in this part of the world) increasing the daily tally. We took the road out to Rhu, pausing along the way to see what was about. There was not a great deal apart from mergansers, mallards and little grebes, which flock to this part of the coast in the winter, until we reached the skerries where common seals usually congregate. There we picked up a large dog otter fishing off one of the rocks. It caught two largish fish in quick succession, both of which it brought onto the shore to eat – our first of the year.

We parked at one of our favourite spots at the end of the public road and settled down to scan the sea. As we watched a mink swam towards us from a nearby rock with a fish in its mouth. Considering it was in the water, it looked remarkably fluffy. On spotting us, it casually veered slightly away before climbing up the shore and across the end of the road before disappearing. Mink still appear to be quite common in this area and must not be inhibited by the local otters who also frequent this shoreline. Despite this it is rare to see them, and quite a treat, whatever our feelings might be about these destructive little predators. In the bay there were numerous black guillemots, all languishing in winter greys, several mergansers, a couple of great northern divers and a single red-throated diver. The latter was grappling with a flatfish, which always seems to cause divers a problem. It took several minutes and several catch and releases before the fish was positioned just so, and finally swallowed. We walked out to the stunning little sandy beach at Port nam Murrach, which we were delighted to have to ourselves. As we contemplated the turquoise waters, a juvenile white-tailed eagle flew low over our heads. A few minutes later it reappeared with an adult eagle. Both were mobbed by both ravens and a buzzard. On the way back our raptor count was swelled by a sparrowhawk, giving us a total of over 40 bird species for the day. This is a trip we take guests on in the shoulder periods when it is not too busy and can often throw up some good sightings.

Dodging (most) showers we also manged a walk at Lochy Mouth from Fort William two days ago – another favourite place to take people. For a quick outing we had a reasonable bird count of 30 species, including goosander, merganser and goldeneye in the sea and ringed plover on the mudflats. Both dipper and grey wagtail were spotted along the river. The highlight was a kingfisher sitting on a branch by the side of a small creek. We often see one here. On returning from Inverlochy Castle the tide had retreated further and we spotted a distant otter fishing in the bay. Not bad for a shopping trip! We have already seen a kingfisher this year along the canal near Glen Loy. This also seems to have been a regular haunt this winter. It may well be that the recent mild winters have benefitted the local kingfishers. It is felt that they are at the northern edge of their distribution in Lochaber and are susceptible to cold winters.

Back at home the wildlife has been active despite the rain. We have three, invariably soggy, martens that are appearing in ones and twos every evening to feed. As usual at this time of year they are rather bold, barely retreating to allow me to put out their peanut butter treats. A red squirrel is venturing out to the seed feeder on milder days, where he sits and stuffs himself before disappearing into the rhododendrons. This does not seem to put the birds off. Our chaffinch flock has grown to at least 60, and together with a cast of other garden birds make short work of the seed feeders. A flock of over 100 siskins wheels around the garden daily, breaking into groups to alight on the conifers and use the peanut feeders. In the tops of the trees they are joined by crossbills, who, as predicted, have stayed in numbers this winter. Males are busy singing from the tallest conifers each morning. Crossbills are early breeders and hopefully they will establish a couple of territories around the Lodge this spring. Occasional visitors include collared doves, which join the feeding throng, along with the odd yellowhammer. Woodcock may be seen along our drive at night, one of which we even managed to photograph. Best of all, Angela had a glimpse of a possible wildcat at nearby Moy one evening before Christmas. It is good to think that these occasional visits from our rarest mammal will continue into the new decade.