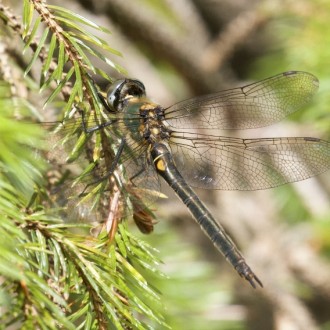 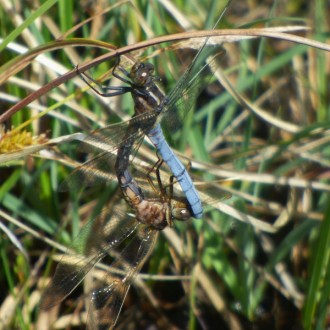 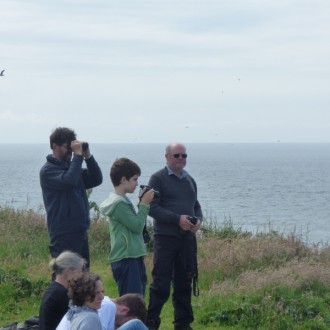 After a week of brilliant sunshine at the end of June the weather went pear-shaped, just in time for our Northern Dragonfly break. We hardly managed a decent day’s sun that week and had to rely on scraps of brightness. These, however, turned out to be quite productive. A walk around the forest at Inniemore provided the hoped-for Northern Emerald. A female obligingly perched on a low branch in the cool weather between bursts of sunshine and posed for photographs. Other odonata out and about that day included the aptly named Beautiful Demoiselle, a teneral Keeled Skimmer, the first Common Darter of the season and the ubiquitous Golden-ringed. Similarly, a brief spell of sun brought out Northern Damselflies on a trip across to Speyside. These were found at two sites, and I was able to pot one directly from vegetation away from the water’s edge so that we could all have a good look. Azure Hawkers were found in Glen Loy, and also by the falls at Chia-Aig. Again, these emerged to buzz around as the sun appeared, but were happy to bask on heaps of chippings when it went in, once more allowing for photographs. Although the weather did not warrant a trip to see White-faced Darters, we were able to point out a good site that guests would pass on the (much brighter) Saturday of leaving, having sussed this out the previous week. We also found another site for WFD above the shores of Loch Morar on what was undoubtedly our hottest day of the year. This was more remarkable for the large number of Keeled Skimmers we saw that day, in almost every little burn and trickle of water crossing the paths, Surely, there must have been a dramatic expansion of this species in Lochaber over the past couple of years.

Butterflies were also out in good numbers whenever the sun shone. There appears to have been an invasion of Painted Ladies this spring in coastal areas and on the islands. We have picked up rather faded specimens over the past couple of weeks from islands as diverse as Lunga, Staffa and Sanday. These have been accompanied by a smattering of rather fresher Red Admirals, another migratory species. The Large Heaths have also been out in force, coinciding nicely with the dragonfly week, but have also been encountered widely over the last three weeks. These have often been seen with Dark Green Fritillaries zooming about close by, whilst the much weaker-flying Small Pearl-bordered fritillaries are still on the wing, albeit looking tired. The Common Blues have finally made an appearance, particularly around the coast, and at Lochaline recently these were also joined by a couple of Grayling. The latter are never common inland, so always a bonus.

There has been a good display of wildflowers in the last couple of weeks, tempered by over-officious strimming of the road verges. Orchids have been late to flower this year, with the consequence that the bogs are ablaze with heath spotted orchid at present. We had a look at Forest and Land Scotland’s (that term takes some getting used to) Coronation Meadow at Fiunary. There is a good range of flowers there, including Meadow Vetchling, Eyebrights and Yellow Rattle, but the whole field has been heavily encroached upon by pernicious bracken, and may soon be lost. The most unusual plant we found was Common Centaury, an uncommon flower in these parts. We also looked for Irish Lady’s Tresses in a fabulous wet meadow at Lochaline, full of colour and deserving of wellies. We were probably too early, but the wealth of variety there warrants further investigation. We have stumbled across a couple of interesting species recently. Green Spleenwort is a delicate little fern, usually found on limestone, but noticed by a sharp-eyed guest on the stones banking the canal. We returned recently to check and photograph this. Whilst wandering on Canna we also came across a colony of Marsh St John’s Wort, a plant I don’t believe I have seen before. The leaves are almost succulent and quite distinctive, quite unlike those of other Hypericums. There were other very nice limey banks on Sanday, where we also found Centaury along with copious Lady’s Bedstraw, Burnet Rose and a range of orchids.

A trip out to the Treshnish Isles with a Puffin-hungry youngster produced some excellent sightings. On the way to Kilchoan we spotted a pair of Otters and both Red and Fallow Deer. Soon after departing we were surrounded by huge flocks of Manx Shearwater and fishing Gannets. These were accompanied by Harbour Porpoise and a feeding Minke Whale. The Puffins did not disappoint, nor did the hordes of Guillemot, busily feeding youngsters, some of which had already made the leap of faith into the sea. Off-shore both Great Skua and Arctic Skua patrolled, and we were treated to the incongruous view of a Bonxie drowning and feasting on an unfortunate Puffin. Twite were spotted on both Lunga and Staffa. We had a clear Snipe on Lunga and even a quick glimpse of a Corncrake, its russet wings clearly visible as it fluttered into long vegetation. The sun managed to shine all day, which made for a memorable excursion.

At Glenloy Lodge our three Pine Marten kits are growing up fast and the boys are already larger than their mother. They tumble around and over each other whilst feeding, and try to copy mum, not always matching her climbing skills and dexterity. Once the food provided is all gone, they often turn to mum’s milk-bar, much to her disquiet. The Red Squirrels are still busy eating through tremendous volumes of peanuts and seem little bothered by the Pine Marten antics. Most of the tails have turned quite blond now. Unusual visitors to the bird table have included Yellowhammer and Greenfinch. Over the last few weeks Crossbills have become regular visitors to the conifers around the garden as the cones begin to ripen. There promises to be a bumper crop this winter, so we look forward to many more Crossbill sightings.