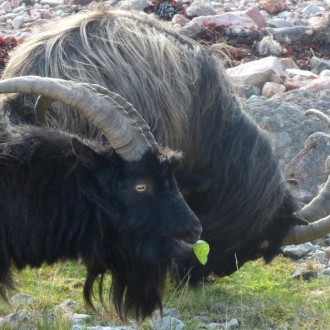 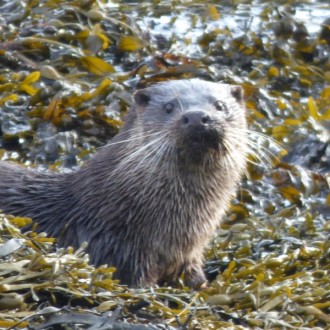 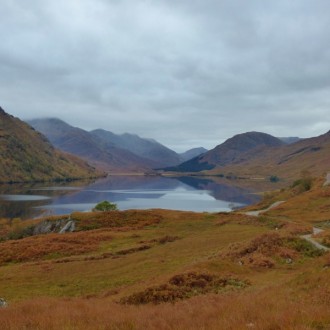 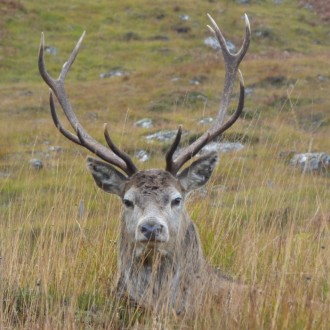 It has been a fabulous autumn of colour and fruitfulness here in the West Highlands of Scotland. As the clocks have now gone back, we have shut up shop for the season, but not before various guests enjoyed rather different experiences with Glenloy Wildlife during our last week of operation in 2019.

A couple on a Pine Marten Break joined us for a day’s wildlife trip. The weather was good, fortunately, and we enjoyed a “Big 5” day – a fitting end to our last day trip of the season. The day started off well with roe deer along the Banavie road. Somewhat worryingly the common seals were not on their usual rocks, but several had returned to haul out on our return. We did, however, see a great northern diver just starting to transition from breeding plumage, along with Slavonian grebes, also in transition, and a red throated diver. Groups of hinds and calves munched nonchalantly close to the road, scarcely guarded by attendant stags, looking rather tired. Our trip around th coast road yielded a trio of billy goats down on the shore, and eventually two otters fishing. This was a mother and well-grown cub. The latter fished close to the shore, mainly on crabs (which immature otters find easier to catch then fish), for around half an hour. While we were otter watching a golden eagle appeared briefly behind us, mobbed by buzzards. We had a further glimpse of a goldie whilst eating lunch soon after. More deer were seen in the glen on the road to Lochaline. Walking down to the marina from the ferry terminal we had even better views of an old dog otter that swam ashore beneath us to eat a scorpion fish. Two white-tailed eagles appeared above the hills on the far side of the loch, along with buzzards and ravens. A seal swam by us while we were searching for fossils. On the way back we witnessed a huge flock of fieldfare gorging on rowan berries. We stopped off to look for red squirrels and were rewarded with at least two individuals busy on the nut feeders before dashing off to cache their treasures. The pine martens were waiting for us when we returned to the Lodge.

A last-minute booking for a pine marten viewing was also successful. This time the martens made our guests wait a while, which gave the couple the opportunity to enjoy tea and cake, whilst the anticipation built. Our resident female appeared first, happy to nibble on nuts, before moving on to bread and peanut butter. She is looking very fluffy in her now complete winter coat. One of her sons soon joined her, and they fed quite peacefully together for a while. His first winter coat is also thick and bushy and he now looks even larger than his mother than he did. She wandered off after a while leaving him to polish off the treats with several return forays to clear up the scraps. The viewing time was a healthy 40 minutes or so, allowing for lots of photographs. Spotlights at the front of the Lodge provide good visibility, and do not appear to bother the martens.

The final outing of the season was a half-day trip to look for deer with a couple of French ladies. I took them up Glen Roy, knowing that the scenery and autumn colours would be spectacular, on what turned out to be a glorious afternoon. Jays flitted across the oak trees, acorns in beak. The deer did not disappoint. From the viewpoint we were able to watch a sika stag hopefully following a couple of hinds and chase off a young male. The stag looked almost black. Further up the hill was a herd of red deer, with several hinds still accompanied by a large stag. As we were watching these a pair of ravens flew over the hilltop, soon followed by a golden eagle. Below us groups of migratory thrushes once again stuck to the trees. We saw several other groups of red deer as we moved on up the glen, and a further pair of golden eagles, giving a good display just skimming the hill tops. Goldcrest flitted in the plantation at the end. Several groups of hinds and stags were on the hillside above the shooting lodge, with several young and subordinate stags on the periphery. Rutting behaviours were still being exhibited. This was beautifully illustrated on the river terraces in low sunlight on the return trip, with a stag rounding up his group of hinds. Best of all, a beautiful female merlin flew off a perch by the side of the road and jinked down the glen in front of us, periodically stopping to rest again on fence post, affording great views.

This weekend the mountain tops viewed from Glenloy Lodge have been covered with snow, turning pink in the setting sun. The trees around the garden have been alive with small groups of chipping crossbills, and large flocks of siskins and redpolls, the latter feeding on alder cones. Red squirrels have started to reappear after a few weeks’ absence. The resident tits and chaffinches have been joined by an increasing number of visitors as the weather has turned colder, including a handsome treecreeper. The martens are rolling up before 5 o’clock now, and all is suggesting that winter is coming!