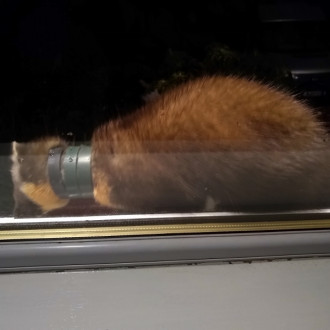 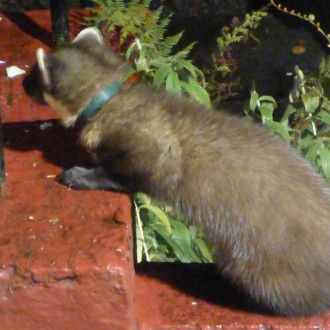 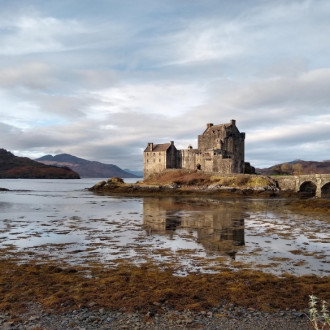 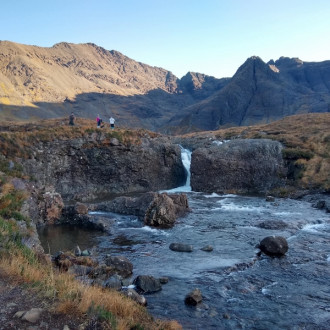 We have finally solved the mystery of the collared marten! The pine marten with the collar has still been a regular visitor. However, we were horrified to see that on one night it arrived with no less than three ‘collars’! These we now recognised as the plastic guards off the top of wire mesh peanut feeders. Inspection of the feeders confirmed that there were indeed two more missing rings. We have long known that the martens edge their way out to the end of a thin branch where a couple of the feeders are suspended and haul a feeder up onto the branch to try a dislodge peanuts from it. Indeed, we have witnessed this and caught the behaviour on camera trap. It seems that one individual has been getting its head through the mouth of the feeder and then bringing out the plastic ring round its neck when it pulls its head out. Fortunately, it has lost two of the rings already and hopefully may manage to get rid of the third. As far as I know it is only one marten that is doing this, and I have removed any other plastic rings from the peanut feeders. If you are lucky enough to have visiting martens it is worth checking any feeders you may use to ensure that any plastic rings are secure.

We bought cheap wire feeders, as regardless of the quality, our red squirrels still manage to destroy the mesh in a matter of weeks. After a leave of absence our squirrels are back with a vengeance and busy tucking into peanuts. They work away at the joins in the mesh until they create a hole for easy access, and it is no wonder that any retaining rings become loose. It is not unusual to see three or even four squirrels at a time busy feeding. We have also started feeding sunflower hearts (as opposed to whole seeds) this year and the squirrels also enjoy these. Every morning one sits in a seed tray and takes more than its fair share from the birds. As ever, the squirrels are very possessive and often squabbles and chases ensue over feeder rights. Evenly matched squirrels sit glaring at each other, issuing an angry, bubbly chittering. The agility of the little beasts, hanging from a branch suspended by seemingly a toe and a curl of the tail never fails to amaze. While the weather continues to be reasonably mild, we expect to continue to enjoy their antics around the garden.

Our immense chaffinch flock (over eighty some days) do not seem to have taken much of an autumn break this year and continue to mob the feeders. Underneath, these are joined by visiting blackbirds, which have swelled in numbers. There is a dearth of berries locally this year and we are not seeing much in the way of other thrushes, at least not in the garden. The coal tits dash in and steal a morsel from under the beaks of their larger brethren whenever they can. Perhaps as many as thirty are visiting now. Occasionally the chaffinch hordes attract other birds. To date, this November we have had a single brambling, a yellowhammer, goldfinches, and a pair of greenfinches (uncommon in this area). The jays have started hunting for their buried treasure now that the trees have been stripped. The local woodpeckers are also once again visiting the feeders on a regular basis. Long-tailed tits are abundant locally, particularly on the tree along the Loy, but only ever seem to pass through the garden without using the feeders.

Further afield we have enjoyed the chance to travel a bit within the Highlands and visit some of our favourite spots without guests. We were pleased to see a white-tailed eagle flying over Eilan Shona, behind Castle Tioram, always a great setting. Shortly after, an otter swam from one side of the bay into the channel behind the castle carrying a large crab. A trip to Skye produced a further otter near Eilan Donan Castle, wild goats, a perched golden eagle and plenty of deer. We also had the almost surreal experience of visiting Eilean Donan in the absence of any other tourists! The same could not be said for the Fairy Pools. Purple sandpipers were on the rocks at Mallaig with both grey and common seals in the harbour. A less expected sight was a herd of eight sika deer on a patch of waste land actually in Morar village. The deer were quite unperturbed by passing traffic and nearby workmen. A walk up Glen Loy produced a good view of a hunting goldie and another mystery. We seem to have acquired some goats at the end of the glen. Not sure where these have come from, so we have another investigation to keep us busy!