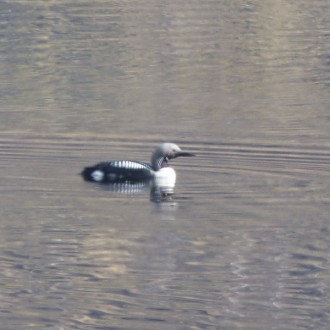 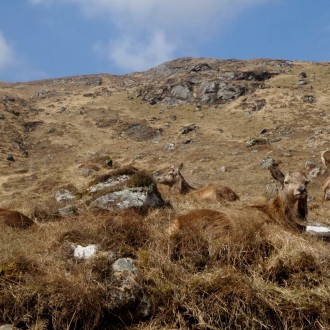 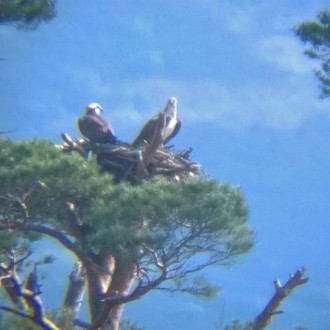 We are still enjoying a prolonged period of fine, albeit cold weather, which started whilst the last of our holiday guests were here. Unfortunately, we are now starting to see the inevitable grass fires spiralling out of control, but that is another story. Similarly, planning permission has been granted for the destruction of ancient woodland habitat in the building of an unnecessary hydro scheme at the Allt Mhuic butterfly reserve. On a more positive note, the migrant birds are flooding in, the spring flowers are starting to come out and all is generally well with the world. What a struggle we had with otters and eagles last weekend, however, with weather and tides against us! All ended well, fortunately, and a good break was had by all.

We got off to a good start with great northern diver in breeding plumage, a flock of no less than 16 Slavonian grebes similarly attired, and as many as 60 common seal on the rocks at Sallachan. There were plenty more divers and other seabirds about, along the Kingairloch Road, along with freshly arrived wheatear, plenty of wild goats and red deer further on. Not a sniff of an otter, however, on a low tide. After much searching, we picked up a sea eagle at Lochaline, which obligingly landed for some minutes before it flew along the ridge. A family of whooper swans was lingering on their way north, feeding on a weedy lochan. Returning fieldfare and redwing were also migrating along the coast.

The next day we saw 8 blackcock going mad on their lek, vying to impress a lurking female. The males were leaping high in the air and hissing as well as sparring vigorously. A lingering glaucous gull was present at Lochy Mouth, but no otters. Glen Roy produced sika and red deer, as well as a merlin, but no sign of the elusive golden eagles. With cloud over the tops Glen Loy was no more productive. We did find a large flock of sand martins on the Lochy and had chiffchaff calling in the garden. On our last day we hunted high and low for otters along various bits of coast but had to settle for raptors. We had one good view of a golden eagle, two distant ones, a peregrine, and a sea eagle perched near Castle Tioram. Other things of interest included wood anemone, and our first cuckoo flower in bloom and plenty of peacock butterflies in the welcome sunshine.

A further trip to Fort William in the early morning finally yielded two otters, which we watched for around 40 minutes, much to everyone’s delight and my relief. Taking Kay back to the station later that morning we spotted a peregrine perched on the rather feeble steeple of the Catholic church – somewhere I have never seen one before. The day continued in similar vein, as Angela and I made an exploratory search up Loch Arkaig. We saw no less than six ospreys, including three on nest sites and another pair flying near the Woodland Trust site (presumably the famous Aila and Louis). We also found the resident sea eagles and located the nest, with a sitting hen, from across the loch with the aid of scope. A pair of black-throated divers was back on the Lochy, and either the same or a different pair was spotted up Loch Arkaig later on in the day. Why couldn’t we find these for guests? Typically, we also had three excellent golden eagle sightings on another trip later in the week! We also heard our first willow warblers of the year and found our first sandpiper on Loch Sunart.

At home, pine martens continue to be seen each evening and red squirrels every morning. We now know our resident mum has had three kits, which are still quite small and yet to open their eyes. She is not feeding for long and prefers to return to her den after short hunting trips. This leaves an opening for the boys, who still are hanging around the Lodge, although generally waiting until after the sun has gone down to appear. We did, however, see mum chasing her last year’s kit away in no uncertain terms, although he was back helping himself the next night. Bats are now emerging from the Lodge each evening, and one even managed to find its way into the sun lounge, to the added entertainment of guests. We have also had some bumper hauls of moths in the trap, providing it has not been too clear and frosty. These mostly comprise a limited number of species at this time of year, but it is amazing to see just how many Hebrew characters can be caught in one night!’ Best’ moth so far has been a pale pinion, and prettiest an oak beauty!