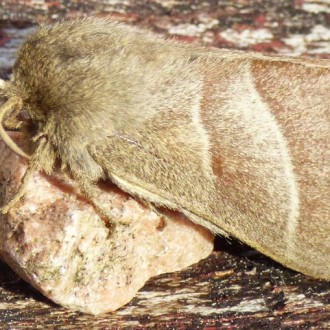 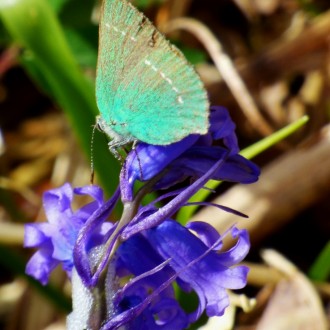 What a difference a week makes! At the beginning of May it was cold with overnight frosts and fresh snow on the mountain tops. These were the conditions that greeted our ‘spring birders’, a visiting group from the Bristol Ornithological Club. The cold lasted all week, finishing off some of our early planting, and killing many unfurling young leaves, particularly on oak. The day folk left, the temperatures started to rise and by Sunday the 12th had brought out loads of butterflies. The mercury continued to rise to the heady heights (for us) of 23oC over the course of the week. Nevertheless, the cold probably delayed the departure of some of our wintering birds, although it also slowed up the arrival of later summer migrants.

In total we had at least 112 species of birds seen or heard during the week. Divers were an undoubted highlight. The great northern divers had largely acquired their summer plumage and were yet to depart. We found three pairs of black-throated divers, two of which appeared at close range, allowing for photo opportunities. We also had several pairs of red-throated divers in breeding plumage, which can be quite tricky to find in Lochaber. One or two other species of waterfowl lingered in our area. These included a gadwall and a shoveler, both unusual visitors, and a young whooper swan. The latter was accompanying a pair of mutes and overlooked by several of the party, straining for views of a greenshank! Waders were also on the move, with winter visitors such as turnstone still present. Summer breeders such as greenshank, dunlin and golden plover were all seen at lower levels in breeding plumage. Others were passing through, including a small group of purple sandpipers in breeding plumage, overhead whimbrel and a probable jack snipe.

Passerines were still arriving. Most of us had good views of cuckoo, and all had a great view of a cock ring ouzel singing at Brae Roy. The wood warblers were all performing nicely among the bluebell woods at Ariundle, although there was no sign yet of redstarts or flycatchers. Tree pipits displayed everywhere, we had lots of good sightings of whinchat and wheatear and a variety of small warblers either provided fleeting glimpses or provided bursts of song, despite the cold. These included rather reluctant grasshopper warblers. Hirundines are now all back, except for the swifts. The week also provided some excellent raptor sightings, with pride of place going to hen harriers. After a seeming dearth of males, we had excellent birds in both Glen Roy and on Muck. We also had a nice sea eagle on Muck, together with the first of the year’s arctic terns. Sea eagles were also spotted from the ferry slip at Ardgour, and while waiting for the boat at Arisaig. A number of golden eagles were also seen during the week, along with a couple of peregrines and ospreys, one of which was carrying a large fish. We watched a dipper carry food up to its chicks, black grouse lekking and red grouse posing. One member even spotted a local kingfisher. A great week for birding.

On our first butterfly transect of the year we had a bumper haul of butterflies. These included no less than five pearl-bordered fritillaries and a couple of green hairstreak, with loads of orange-tips and green-veined whites. No chequered skippers in Glen Loy yet, which is probably just as well as we don’t want them to be over before people come specifically to see them. Later in the week the moths were equally as impressive, with over 40 species recorded in the trap one morning (an excellent result for this latitude). Some old favourites have started to reappear, including a large fox moth, the very pretty peach blossom and a handsome saxon. Local scarcities also featured such as dark banded twin-spot carpet, light knot grass, and the v-pug, which seems to be spreading north. On a mountain walk we had what I think were netted mountain moths, which would be a new record for the area, although sadly we failed to get a photo.

On the same walk up Aonach Mor we saw at least seven mountain hare. These are now fully in summer coats and appear ‘blue’ as often described. We surprisingly did not have to go far from the tourist trails to see them. Birds were rather more elusive. Of the mountain specialists, the only one definitely recorded was ring ouzel on the northern crags, but there were plenty of ptarmigan droppings. Our red squirrels are also starting to acquire their summer coats, with the tips of some tails becoming blond. The pine martens are looking a bit scruffy as the moult progresses. They now have rich dark chocolate heads and feet, with a degree of mottling elsewhere. Both squirrels and martens are still visiting daily, with a surprising degree of overlap inactivity in the early evenings.