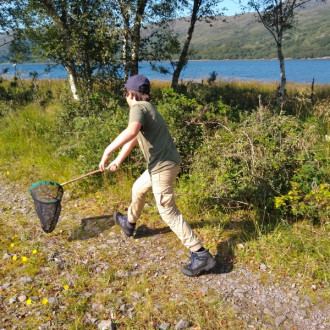 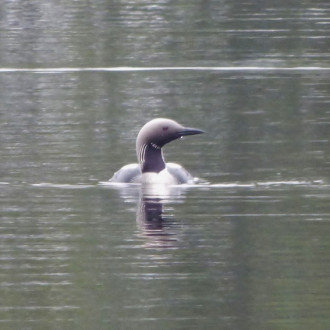 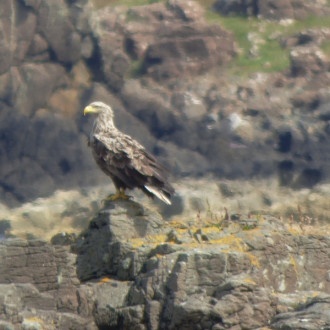 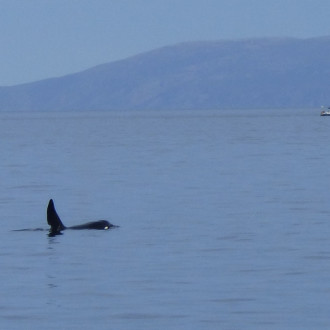 Great start to the season with our first full week’s holiday. A returning family with two young boys brought the warm weather from down south with them, and we had one of the sunniest weeks in August that we can recall. Nights were sufficiently cool to allow them to catch up on some sleep. The wildlife wasn’t bad either!

Undoubted highlight of the week came on a boat trip to Staffa, courtesy of Staffa Tours. An orca was spotted between Ardnamurchan and Coll and the skipper immediately went to have a look. There was some debate (unresolved) as to whether there was one bull orca or two. One was definitely the Hebridean resident John Coe, which has a distinctive notched dorsal fin. The other appeared to have a much taller, thinner fin with a bit of a twist to it, but this may just have been an optical illusion and the whales were one and the same. Nevertheless, we had a really good sighting and watched the orca(s) for the best part of half an hour. While orca watching we were distracted by first a great skua, then an artic skua harassing a gull. Sea conditions were excellent for viewing and we also had good sightings of many different porpoises. Later in the day we went to see a couple of minke whales feeding offshore of Iona, with distant dolphins viewed from Staffa. The island itself was quiet – our half-full boat supplied the only visitors while we were there, meaning that we could enter Fingal’s Cave (path now restored) without the usual queuing. On the way back we had a great view of a white-tailed eagle on a rock, which took off briefly before re-landing. Supporting cast included shearwaters, gannets, auks (though very few puffins), and both common and Atlantic grey seals. A fantastic day out.

At a more modest level we looked for rather smaller marine creatures in a foray along the rocky lower shore below Ballachulish Bridge. Although not ideal tides, we managed to find a fair variety of creatures, which kept the boys entertained. These included plentiful shore crabs, common sea stars and green sea urchins. A couple of large butterfish were dutifully caught and placed in a tray, but they failed to entice any otters. Of the more esoteric oddities that we found, I was impressed by an ever-expanding bootlace worm, which seemed to reach a length of several metres. A small scale-worm was also found, yet to be identified, along with numerous gastropod. Some of these had long been ousted from their shells, which were now occupied by hermit crabs. Always good to have a guddle in the seaweed. Over the course of the week the boys perfected their skimming techniques, having found that there is hardly a thing as a flat pebble along the beach at Cuil Bay (but a nice little flock of ringed plovers made up for this, with a red-throated diver offshore).

Raptors seemed to be a theme of the week. In addition to at least four white-tails we had seven golden eagles, one of which was one of this year’s juveniles, close to two adults, and another probably in its second year. Had a good display from an adult pair in Morvern. We also managed to find no less than three merlin. One was buzzing a buzzard, another skimming across the water at Loch Ruthven and the other took off from a rock on top of a mountain. Returning from Loch Ruthven the morning mist finally lifted, and the air heated rapidly, bringing out all sorts of birds of prey including red kites, buzzards, eagles, kestrel and harriers. At Ballachulish quarry there was a young peregrine, possibly one that has been raised there. We also had good views of a pair of sparrowhawk, one of which subsequently mobbed an eagle.

Everywhere we went this week the grass was full of Scotch Argus butterflies. Although the other predominant species were peacock and green-veined white, we managed a good selection of late summer species. We always like to encourage children to do a bit of butterfly netting so that they can see them close up (and then carefully release them). Similarly, there is nothing like letting a poplar hawkmoth crawl onto a child’s finger to stimulate their interest. We even managed to catch a couple of grasshoppers, which were busy chirping away in the sunshine. It is a pleasure to be able to show well behaved children some of the wonders of our natural world, doubly so as they are much better at spotting things than we are.