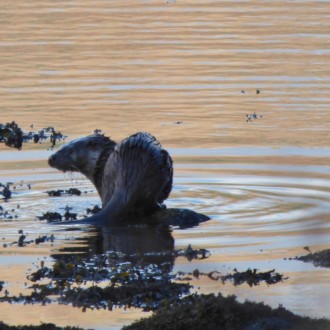 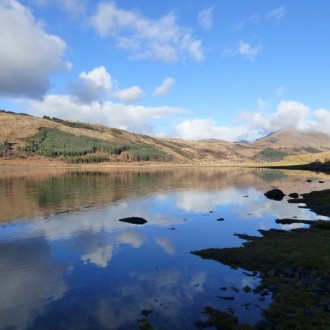 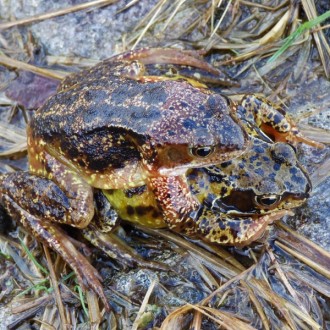 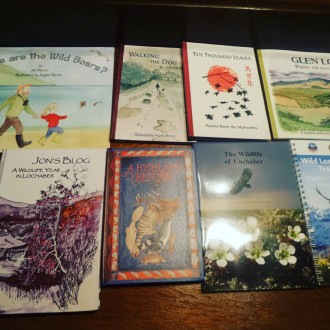 We have experienced a relatively mild winter to date, with virtually no snow left on the mountain tops of Lochaber towards the end of February. The Highland winter is far from over, however, and March has come roaring in with snow, gales and torrential rain. The peaks are once again snow-capped. The saving grace at this time of year is that the nights are getting shorter. We cannot help thinking though, that unless there is a serious cold spell this month that there will be precious little in the way of snow patches left on the mountains come June. These constitute a special habitat in their own right, and several specialist mountain plants and bryophytes rely on them, as do their attendant invertebrate populations. Further up the food chain, apparently ptarmigan and mountain hare have already had to ascend to the tops of the Cairngorms so that their winter camouflage remains an asset and not a liability. On a family trip to Northern Ireland, some two weeks ago now, celandines were already well in flower. I looked in vain for these today locally but saw very few signs of spring, until I found a sheltered bank enlivened by primroses.

People often ask us what we do in winter. No doubt we are imagined luxuriating on tropical shores with our lightly earned gains. The truth is rather more prosaic. There is all the administration and paraphernalia involved with running a business that we must see to when we are not flat out running wildlife holidays and trips. There is advertising to attend to, website, insurance, trips to plan, décor of the lodge to consider, worn furniture to replace, outdoor maintenance tasks to undertake, and so the list goes on. The minibus is just back from its biannual health check. In amongst this we write, illustrate, attend and even chair meetings and find time for family. Best of all we squeeze in some time, weather permitting, to do some reconnoitring of new and existing places that can be used to show guests the local wildlife. At the end of all this our new season has just started, and our first guests have enjoyed evening pine marten viewings. Our first holiday of the year, Winter Wildlife, starts on 15th March, and there are still places available if anyone fancies a break.

We have managed a couple of amazing forays out to look for wildlife recently. On one fine day towards the end of January we spotted no less than six otters. These included a mother with two small cubs, well shepherded. A local Natural History Society outing, which I led, produced a total of 38 species of bird, including sea eagle and the added bonus of two more otters. All in the pouring rain. Other birds include Slavonian grebes, a flock of dunlin and an early / lingering greenshank. Had the outing not been organised no doubt we would not have not gone out that day, so it just goes to show what we might be missing. Yesterday was fine and calm, with only the odd shower. It was also our second ‘Big 5’ day of the year. We saw red squirrels at home, over 40 harbour seals on the rocks at Sallachan, a golden eagle perched on a craig, three otters (one of which posed very nicely for photographs), and hundreds of red deer that emerged as the afternoon wore on. In addition to these we found our first porpoise of the year, a close flypast by a sea eagle, wild goats galore, many 10’s of great northern divers, no less than 16 Slavs and a host of supporting birds. Perhaps the most interesting of these was a group of purple sandpipers tucked in with a flock of turnstone. Also on the move were flocks of song thrushes, skylarks and meadow pipits by the shore of Loch Linnhe, with a pair of reed bunting thrown in for good measure. We can only hope to be as fortunate when the first guests are taken out.

Back at the Lodge we still have the same three pine martens coming regularly to feed – mum, her last year’s kit and a male from the previous year (2017). The social tolerance of related pine martens might have come as a surprise to the Winterwatch team, but not here. The older male will be mature this year and we expect he will be pushed away before long by his mother. The female should be producing her kits any time soon. Given that she is still enveloped in thick winter fluff and the babies are very small when they are born, it is difficult to know if she is imminently expecting. The red squirrels are very active at the moment. When they are not busy chasing each other round they have a tendency to monopolise certain of the bird feeders. One, rather grey, individual has a morning ritual that includes sitting in a seed -tray and scoffing black sunflower seeds. Chaffinches dominate the feeding station, but after being largely absent throughout the winter the first siskins are starting to arrive. Great spotted woodpeckers have been drumming for about a month now and continue to visit the feeders, as do jays, looking for scraps. February’s mild weather brought the frogs out early, and they have already seem to have finished spawning in the Glenloy garden pond – starting on 28th Feb and finishing on March 5th, possibly the earliest we have recorded them here.

We have put most of our creative output on to the web site now, so if you need a gift or fancy something new to read – or like us have a new grandchild, then have a look Publications