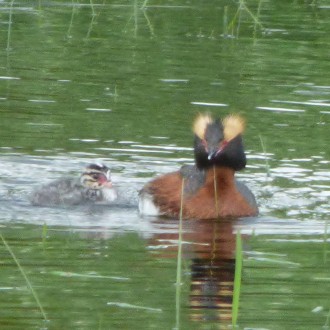 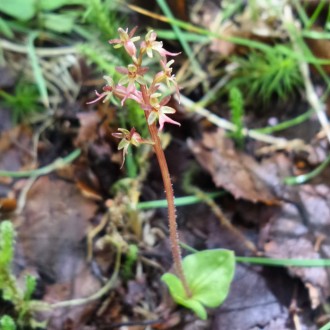 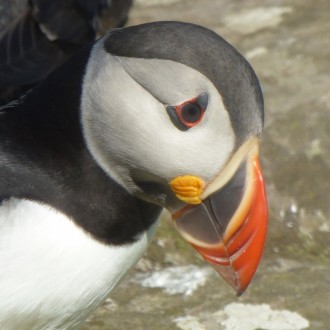 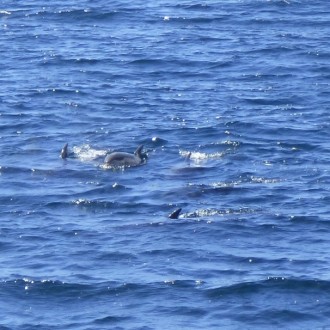 As we move into mid-June, the birds stop singing as much and babies start to appear throughout Lochaber. The first and most obvious were the goslings – Canada and greylag in flotillas, off to an early start. These were soon joined by ducklings, with mallard, teal, eider and a couple of pretty shelduck. Even the gull chicks seem almost cute, tucked up against their mothers’ bodies. On the sea cliffs, kittiwake chicks looked suitably fluffy and guillemot babies poked out from under a parent to accept unfeasibly large fish. Puffins scurried down their burrows with large sand-eels; a sign that the fishing is healthy in the waters around Mull. Wader chicks that we have spotted have included oystercatcher, sandpiper and ringed plover, all looking precarious in the face of ever-present gulls. We even managed to visit a celebrity youngster. A young Slavonian grebe chick that had featured on Springwatch provided marvellous views along with its spectacular parents. Young songbirds have been making contact calls throughout the woodlands, with guests now able to distinguish between a willow and a wood warbler (for now at least!). in the garden baby great-spotted woodpeckers have finally made an appearance, bullying the numerous young tits and chaffinches off the feeders.
In a game of top trumps, the squirrels in turn scare off the woodpeckers. Young squirrels must take their place, however, and wait until the adults have taken their turn. Non-compliance leads to squabbles, with youngsters invariably falling off a slender branch. Deer have also been producing their calves, one of which we were lucky enough to spot with its mother. They are usually kept hidden in the long grass while the hinds feed. The first common seal pup of the season was spotted on a distant rock in Loch Linnhe in the third week of the month. Young bats have been squeaking away in the loft at the Lodge, with the first of the young pipistrelles making an unscheduled appearance in the lounge. Best of all our pine marten mum has brought her kits out at last. Lucky guests were able to see three well-grown kits accompanying their mother to the feeding station, romping as they went. All kits appear healthy and already quite agile, so we hope that they manage to stay safe during the next crucial month.
This was also a month in which we had one or two unexpected sightings. The male pochard is still at Lochy Mouth. This was joined by a juvenile whooper swan this week, previously seen on Loch Lochy. Some of the great northern divers lingered until the beginning of the month. An adult Greenland white-fronted goose was spotted by a sharp-eyed guest amongst a flock of local greylags. Yesterday we heard a cuckoo calling – rather late as most have already started to leave for Africa, leaving meadow pipits to rear their chicks.
June is also a great month for insects, although the weather has been rather patchy this year. Cold, wet intervals have delayed the butterflies. This means that we have been able to see chequered skippers all month (plus increasingly raggy green hairstreaks), and indeed, saw some fresh specimens yesterday. Large heaths have hatched and are already busy mating, and the first common blue of the year has finally emerged. As we suspected this has been a good year for small pearl-bordered fritillary, which are everywhere. We have had some great sightings of marsh fritillary this season, invariably accompanied by small heaths. Moths have been good, particularly the day-fliers. We have seen several bee-hawkmoths, it has been an excellent year for argent and sable and cinnabar are in good numbers. There has also been a big hatch of clouded buff in the last couple of days. Dragonflies have been late but are finally starting to emerge. The first of the season’s golden-ringed dragonflies are now flying and the beautiful demoiselle are out at Inniemore (posing wonderfully in the cool weather). Azure hawkers are also on the wing; we were lucky enough to find one in Glen Loy last weekend in a brief burst of sunshine.

At least plants tend not to be weather dependent. Orchids are now showing, and we have been able to show folk a good range, from unobtrusive small white to showy greater butterfly orchid. A good find of flowering lesser twayblade at Loch Ruthven was a bonus for our butterfly hunters. The northern marsh orchids were late this year but finally appeared in numbers on the local verges. Sadly, these are once again being cut before the orchids have properly had time to set seed. Cetaceans, however, are much easier to see in good weather. We had a friendly young minke just off Eigg, which played with the boat for quite some time. A pod of feeding bottlenose dolphins was also spotted off Staffa – a fitting end to a variable week of weather!